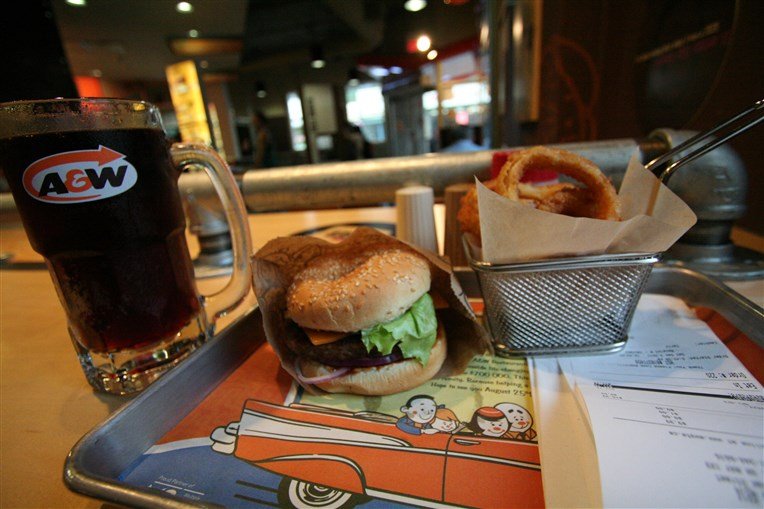 A&W is the oldest US franchise chain in system catering. The company was founded in 1922. The name A&W stands for the initials of the founders Roy Allen and Frank Wright. The chain’s offer consists mainly of hamburgers and hot dogs.

A&W has 485 branches in the US and 209 in other countries such as Australia, Japan and Southeast Asia. Excluding Canada, where the A&W restaurants were sold to Unilever in 1972; the chain there no longer has any relation to the rest. From 2002 to 2011, A&W Restaurants was part of Yum! Brands, a Louisville, Kentucky-based company founded in 1997 that also owns the restaurant chains KFC, Pizza Hut and Taco Bell.

The rather high-priced A&W Root Beer has been sold in retail stores since 1971 and is considered one of the most popular products on the US market. A&W describes it as a “non-alcoholic, caffeine-free soft drink with a herbal flavor”. A & W’s cream soda is another drink from the brand alongside the root beer. It has a vanilla flavor and, unlike most cream soda products from other manufacturers, contains caffeine.

Multi-brand stores are firmly established in the USA: there are now almost 2000 restaurants in which several suppliers from the YUM Brands Group are united under one roof. With a total of 840,000 employees, the company had sales of around 24.2 billion US dollars in 2002. “Our multi-brand stores are so popular because they offer a wider range of products,” explains Morten S. Haure-Petersen, General Manager of YUM Brands Germany. In the past two years, eight restaurants have sprung up in Germany that rely on the combination of Kentucky Fried Chicken and Pizza Hut. “With the introduction of the new brand A&W.