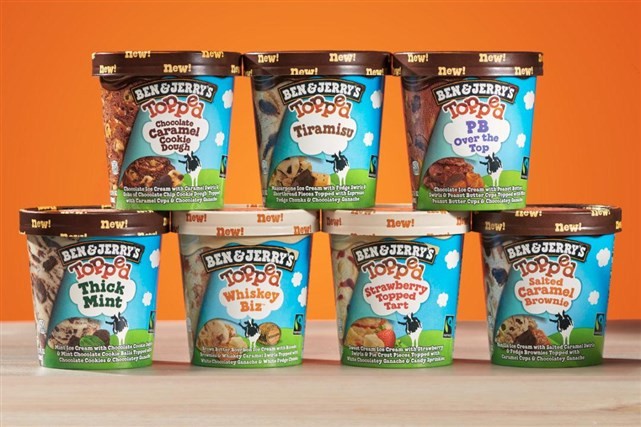 New Yorkers Jerry Greenfield and Bennett Cohen became best friends after meeting in a seventh grade gym class in 1963. Although Greenfield subsequently went off to Oberlin College in Ohio while Cohen stayed in the Empire State and attended Colgate University, the two maintained their friendship and opened an ice cream parlor in May of 1978.

This was after both completed their ice cream making correspondence course from the creamery of Pennsylvania State University. Because of Cohen’s anosmia – the inability to smell – and his near-loss of taste he kept on adding larger chunks of ingredients to the ice cream’s flavors so he can “feel” its texture. Ben & Jerry’s was born in a downtown Burlington, Vermont renovated gas station with an investment of $12,000 that year.

Hip and Cool with a Mission

Today, Ben & Jerry’s has 594 locations – and counting – in the U.S. and 34 countries. Their extremely delicious, albeit not all of which are healthy ice cream flavors, have such creative names which guarantee a smile on whoever tastes it.

From the hip Cherry Garcia to the cool Chunky Monkey, Ben & Jerry’s product mission – to commit itself to the making, distributing, and selling of the finest ice cream by incorporating the most wholesome and only natural ingredients – has never changed or wavered.

What Makes a Graveyard Delicious?

Even when Unilever acquired the company in 2000, Ben & Jerry’s sense of social responsibility continues to make it not only one of the leading business corporations in the U.S. but also one of the most respected. Their sense of humor is unbridled, too.

Ben & Jerry’s has their own “ice cream graveyard,” where ice cream flavors that have been discontinued for manufacture are “buried” and which may be “resurrected” when a customer requests for any of it by simply filling out a form on their website.

Keep Away from The Vermonster!

There are classic concoctions Chocolate Fudge Brownie – which contains chunks of fudgy and chewy brownies made exclusively by the Yonkers, New York-based Greyston Bakery for Ben & Jerry’s – and Chubby Hubby made from vanilla malted ice cream with swirls of peanut butter and fudge and contains peanut butter- and chocolate fudge-filled pretzel nuggets.

If you think that’s decadent, see what The Vermonster is made of: this ice cream sundae, served in a Vermonster Bucket, has 20 ice cream scoops, whipped cream, four ladles of hot chocolate fudge, four bananas, three pieces of chocolate chip cookies, a chocolate brownies, two scoops of any four toppings, and ten walnut scoops. That bucket, and we kid you not, has 14,000 calories and 500 grams of fat!

Of course there are healthier choices even in ice cream heaven like Ben & Jerry’s. Admittedly, the frozen treats by Ben & Jerry’s cannot be created without the traditional ingredients like sugar and milk fats but their selection of homemade flavors has not turned them into diet busters or cholesterol advocates if you stick to a half-cup serving every now and then.

The coffee flavor has 11 grams of fat and 190 calories while the coconut 7-layer bar flavor has 280 calories and 18 grams of fat. Not bad if you stick to portion control religiously. Or you can opt for their frozen yogurts (“FroYos”) that have lower calories and less fat content in still mouthwatering flavors such as the previously mentioned Cherry Garcia and Chocolate Fudge Brownie, Phish Food, and Half-Baked.

The company’s use of Fair Trade certified-ingredients and their commitment to never use recombinant bovine growth hormones (rGBH) in all of their products continue to be the foundation of the business to serve communities and protect the environment. These are the basic tenets which created the company’s Greek yogurt line with Vanilla Bean, Raspberry, Blueberry, and Strawberry flavors.

Each has only a hundred calories, 1.5 to two grams of fat (with a gram of saturated fat), 12 grams of sugar, and four grams of protein. These Greek yogurts have half the calories and small fractions of the saturated fats found in other Ben & Jerry’s flavors that cannot be considered a “sacrifice” to any dieter because they all taste yummy. Not to mention their new gluten-free line of equally scrumptious treats.

Although Ben & Jerry’s is not likely to provide even its most loyal customers a list of their gluten-free flavors, they do call out, according to their company statement, all ingredients which contain barley, malt, rye, oats, flour or wheat on their labels.

The company verifies all ingredients that are used in their ice creams with their suppliers and even packaging partners and they advised customers to always check the label on whichever flavor they purchase since formulations of their recipes can change any time.

A Sense of Social Consciousness and A Sense of Humor

Sure, you can indulgence yourself with Ben & Jerry’s undoubtedly high calorie flavors such as What a Cluster (290 calories, 18 grams of fat), New York Super Fudge Chunk (270 calories, 16 grams of fat) occasionally and their newest flavor, Volun-Tiramisu (230 calories, 12 grams of fat) made of coffee mascarpone ice cream and lady fingers dusted with cocoa and laced with rum coffee.

But remember the healthier options you can always go for with the FroYos, sorbets which have 110 calories or even less per half scoop, and the delectable quartet of Greek FroYos. How else can you describe a company that makes superior-tasting ice cream with a sense of social consciousness and a sense of humor then and now? It’s simply three words: Ben & Jerry’s.