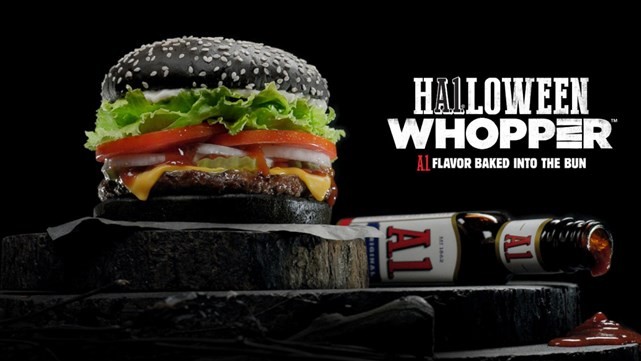 Burger King Kuro Burger  – Most of us see japan as a land of trends. If so, Tokyo is the center of it, the beating heart that draws people to live or visit, in order to imbibe the quirky and cool culture.

Japan is a culture that appreciates trends, making it a hard market to break into. They enjoy new innovations and quirky items, which is not so prevalent in the U.S.A. wherein people choose the food based on taste mostly, where presentation is a secondary consideration.

Tokyo, is the heart of modern trends, be it related to food, lifestyle and fashion. Recently, more people are rushing towards this busy center, not just for their lifestyle or fashion needs, but to try the recently launched Kuro burger.

What Is The Kuro Burger?

Kuro, means black in Japanese, and it does not disappoint. It is decked with black sauce, black cheese and black buns. This is a limited-edition edition item and it was introduced in mid-September, as that would mark Burger King‘s five year anniversary in Japan. Thus, this burger is only available there. The sales are off the charts, which as much as half of the customers ordering this trendy item.

Burger King currently has two Kuro burgers available, the Kuro Pearl and Kuro Diamond, with the pearl being cheaper. They both have black cheese, made using smoked charcoal, onion and garlic sauce made with squid ink to go with the a black pepper burger and the back bun, made with bamboo charcoal. Please note that this product is naturally colored, which means you do not have to worry about unnatural additives or dyes.

This is not the first time that Burger King launched their Kuro burgers. In 2012, they launched their Premium Kuro Burger. The Kuro Ninja followed in 2013, which featured a slice of bacon.

Black Food As A Trend

Please note that all-black food is not new in Japan. Seven years ago, this was all the rage, with black soybean tea, black sesame seed biscuits, black ice cream and even black rice made available to the public. However, this marks the first time that foreign brands have tried to get with this trend.

Weirdly enough, McDonald’s has decided to jump in on the bandwagon and launched their own version of this trend. This is supposed to be their Halloween burger. However, people in Japan, have tactfully called their item “niban senji”, which means second best.

Before we start another war between both brands, it would be best to note that McDonald’s may have gotten on the black bandwagon first. To be fair, McDonald’s in Hong Kong, China and Taiwan have black bun burgers that contain a beef patty with black pepper and onion sauce.

American fast food has always held a special place in Japan, as many people want a taste of American cuisine. However, it would be best to point out that most American restaurants have been trying to keep up with the fashion-forward tastes of the people who reside in Tokyo. The market can be tough, as the executives have yet to fully grasp the true spirit of Japanese culture.

Being unable to find common ground can mean sudden death to any foreign business in Japan, as many of their local food stores are upping the ante when it comes to culinary innovations, making multinational companies understand that they are forced to compete. This is not the first time they have used color changes to attract attention. McDonald’s created the Sakura Pink Teriyaki egg burger to commemorate the cherry blossom season, and this item did help boost their sales.

Please note that the black burger is working like a charm, with regard to providing a much needed sales boost. It is still unclear if they plan to keep this item on the menu for a longer period of time, as it has helped the company gain extra momentum.

In a land where novelty and taste go hand in hand, American players trying to make sure that their brands remain relevant and able to compete with the local offerings. It can be hard to fuse both American and Japanese culture references as times, because they are so different, especially if you consider the marketing strategies in play in both countries.

While the Kuro Burger may not be available at home, it may be enough to know that it has helped stabilize Burger King’s hold on the Japanese market. As of now, there is still no talk about bringing this innovative product to American Burger King outlets.