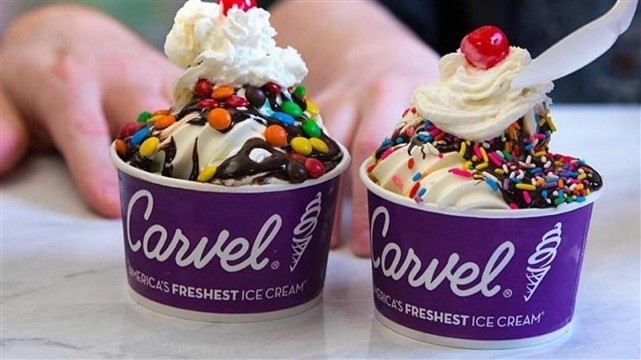 Carvel Menu With Prices – It’s funny how a lot of people don’t realize that some of the best ice cream products sold in the country have been there longer than they think. One such case is Carvel. The company has been around for nearly 85 years and has been one of the pioneers of commercial ice cream in the US.

When people mention Carvel the first things they think about are either soft ice cream or unique ice cream cakes that come in all shapes and sizes. These were innovations that the original founder, Tom Carvel, introduced to the table and it was mostly all by accident.

While the brand might be under new ownership today it still retains its original identity, still sells excellent soft ice cream and ice cream cakes, and it is even growing more than it ever has been.

It all started in 1929 when Tom Carvel started with a small mobile business. He borrowed $15 (which is equivalent to roughly $200 today) from Agnes, who was to be his future wife. For a few years this was how business went by and for the most part it was great.

Come Memorial Day, 1934, and the truck suffered from a flat tire in Hartsdale, New York. Instead of quitting, Tom Carvel decided to simply stay in the location and sell his ice cream there, in the broken down ice cream truck.

Within just two days he sold out all of his stock, even when they were partly melted. This is what made him realize a fixed location, as well as soft ice cream, was very successful and easy to market. Instead of repairing the truck he decided to stay there for as long as possible.

Within the next year his sales shot up to $3,500. In 1937 he replaced the broken truck with a custard and ice cream stand. It had its own freezer, allowing him to make custard on the site. By 1939 his sales had gone beyond $6,000.

Carvel began franchising in 1949. Within a few years there were already more than 25 stores. Starting from 1955 Tom Carvel would record the company’s own commercials. These became very popular in the middle of the 1970s.

It wasn’t until 1989 that Tom Carvel sold the company to Investcorp for a total worth of $80 Million. After the sale, headquarters were moved from Hartsdale to Farmington, Connecticut. The next year Tom Carvel passed away.

In 2001 the company was purchased by Roark Capital Group and was labeled under Roark’s group holder, Focus Groups. This is where the company remains today. Due to the acquisition, Carvel began to grow again and there are now over 500 branches across the east coast. It may not be as many as there was at its peak in the 1960s-70s but it was a great comeback for Carvel.

In 2007 the original Hartsdale store faced closure. The owners of the land applied for permission to replace the Carvel store with their own business. The original Carvel store finally shut its doors in 2008.

Soft ice cream has always been the biggest seller with Carvel. There’s no extravagant styling or packaging. It’s as simple as it gets but that’s what makes Carvel ice cream so great – the focus on simplicity and a delicious, fresh recipe sells the ice cream.

Then there’s the now famous Carvelanche. A Carvelanche is a small treat made of ice cream blended with the toppings. This makes the ice cream thicker and the toppings are now blended in instead of just being on top like a regular sundae.

Ice cream cakes are another very popular item in Carvel. Fudgie the Whale and the Cookie Puss cakes are among the most popular from the brand. They are so popular that they are commonly referenced in pop culture. In 2013, WWE star The Rock called CM Punk a Cookie Puss cake, instigating the conflict to start the battle for the WWE Title Championship.

Carvel is rich with amazing little details and stories. Carvel’s gravelly but welcoming voice became very popular with his commercials and was often cited as a reason why the ads became well-known. The ads were unrehearsed and would always end with the words “thank you”.

The rumor goes that Carvel heard a Carvel radio commercial in 1955 while driving and wasn’t happy with it, particularly with the lack of information given during the advertisement. He then drove directly to the recording studio and did his own impromptu commercial. Soon enough, Carvel opened their own production studio.

Carvel is also a strong innovator in modern business. It was Carvel that was among the first companies to feature sponsor-tie ins (Carvel and the New York Yankees were partners) and it was also the first company to open ice cream supermarkets, the first type of stores where people could buy ready-to-go ice cream to take home.