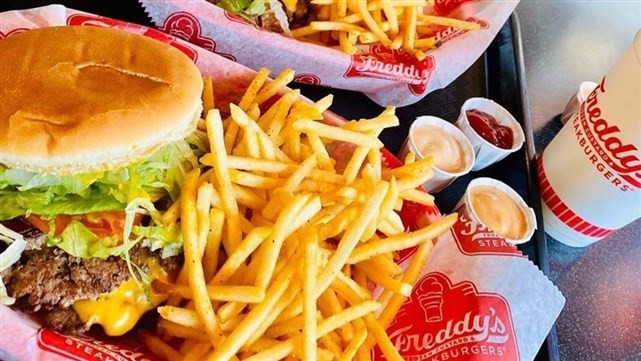 Freddy’s Frozen Custard Menu With Price – When people think of frozen custard and ice cream they often think of conventional stores at the mall – quick service stalls that no one pays attention to. Freddy’s Frozen Custard is the exact opposite and works like a looking glass into the past; the company’s very goals are rooted deeply in the 1950s to bring families together for a good meal and sweet desserts.

Freddy’s Frozen Custard doesn’t prepare food ahead of time. Instead, food is prepared right after ordering so you are always guaranteed fresh food. However, because of the nature of the meals offered (steak burgers, sundaes, and frozen custard) they are quick and easy to prepare that you won’t have to wait long.

Freddy’s Frozen Custard was officially founded in 2002 but its origins date all the way back to the 1950s. Freddy Simon, the namesake of the company, was a World War II veteran and had a lot of good memories dining out with his relatives at friends at local steak burger houses. PinIt had become such an integral part of his life that it inspired the entire theme of the restaurant, which was founded by his two sons Randy and Bill Simon, along with their friend Scott Reddler who worked as the brains and managing head of the company.

In honor of the man that inspired them, the three young men took Freddy’s name as the hallmark of their new business and Freddy’s Frozen Custard was born. The business focused on delivering the same quality food and service blended with camaraderie and the tight social bond that commercialism seems to have eliminated in these day and ages.

The first branch opened in Wichita, Kansas. The first franchise opened in Hutchinson, Kansas just two years later. By 2011, there were 50 stores in operation, with the 50th opening its doors in Victorville, California. In 2013 that number doubled to 100. As of this date there are over 120 Freddy’s Frozen Custard branches all over the United States.

If you’re going to try out Freddy’s Frozen Custard then there are three signature items in the menu that you absolutely must try. These are the bona fide best sellers of the chain and are the ones that people order the most.

First, there is the Signature Turtle Concrete. It’s a concrete so that’s slightly cheating because concretes are basically blended custards to become thicker and smoother but it has pecans, hot fudge, and hot caramel all over it. Then it is topped with whipped cream and a cherry!

The Signature Turtle Concrete is usually placed on the very top of the menu list and there’s a good reason for that – it’s so delicious! It’s basically the traditional vanilla custard with toppings but the preparation and fresh ingredients makes it so worthwhile you’ll swear you taste something radically new.

Then there is the Freddy’s Original Double Steakburger. This is a simple but delicious steak burger that sandwiches two steak burger patties with onions and pickles, mustard, and cheese between butter-roasted burger buns.

This is one of the main steak burger items that Freddy Simon himself is so proud of.

Last but not least among the main best sellers is Freddy’s Philly Cheesesteak. A Philly Cheesesteak is a very peculiar dish because of the way the food is prepared and is one of Philadelphia’s biggest prides but Freddy’s Frozen Custard does justice to the iconic sandwich.

You get delicate, ultra thin steak slices that have been scrambled and melted over with Polvorone cheese, sandwiched in real Italian buns. If you’re looking for the best Philly Cheesesteak and happen to be far away from Philadelphia then you can’t go wrong with Freddy’s Frozen Custard.

As mentioned above, Freddy’s Frozen Custard isn’t named for any of the owners but is instead inspired by their father, Freddy Simon. Freddy Simon was a veteran in World War II and his sons would later practice until they could perfect the same style of steak burger that their father cherished so much.

Despite their big role in the inception of the business, it was Scott Reddler who became the main founder and COO of the company because of his expertise as an entrepreneur.

Another amazing fact is that Freddy’s Frozen Custard constantly churns their custard, ensuring that it is thick and creamy and without any ice crystals or air pockets forming. This ensures that every serving of custard is 100% top of the line when it comes to texture and flavor.