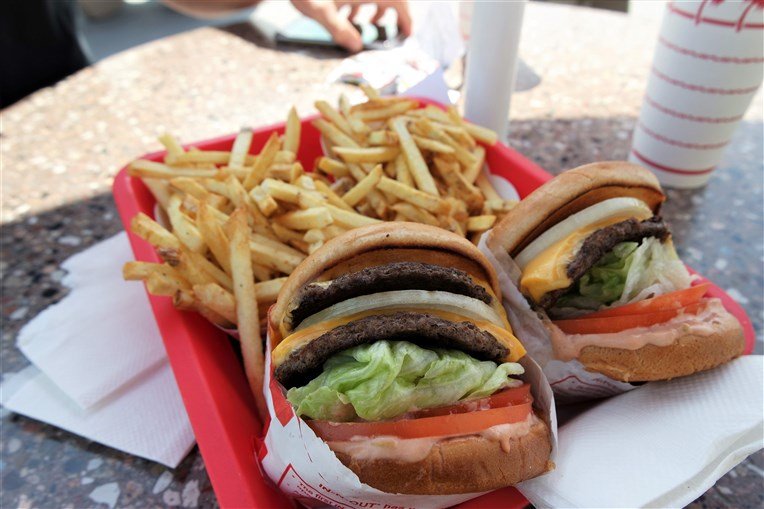 Anyone who is a bit on social media has not been able to avoid the Californian burger chain In-N-Out Burger in the last 2-3 years. And when it comes to great food, Christian and I are a bit like the lemmings: if everyone runs there, then there must be something to it. So go there! We were not disappointed by Shake Shack and Five Guys in New York, so we were really looking forward to the In-N-Out Burger. Before we even properly planned our road trip along the west coast of the USA, Christian had already marked all In-N-Out shops on the rough route in Google Maps as a precaution. Better safe than sorry! But before we tell you what the hype about the burger is all about, let’s first torment you with a bit of basic knowledge about the fast food chain, which is actually no longer a chain.

In-N-Out Burger: Concept and story of the California burger chain

In-N-Out was founded in the late 1940s. Why exactly it took more than 60 years for the hype to spill over to us, we can only guess: In-N-Out is only available in the USA and they are comparatively weak there with just over 300 branches. Most of us probably only heard about it through Instagram or Facebook, we ourselves never heard of it before 2012. Just like Shake Shack, the concept of In-N-Out picks up on the current food trend: It should be fresh and (reasonably) healthy. The meat at In-N-Out is only chilled, not frozen, the salad is made fresh and even the fries are made and prepared from fresh potatoes on site in the restaurant instead of using frozen fries in a bag. And yes, it really is. You can watch your own burger being prepared, the kitchen is always open. And to be honest: you can taste it too! We didn’t believe it ourselves, but the difference is actually clear.

The really weird thing about it is that with In-N-Out Burger the prices also make the competition look really stupid. In-N-Out is the cheapest of all the fast food chains, you get a rich menu with burger, french fries and drink for about 7-8 dollars. How it works? The idea is as simple as it is ingenious. In-N-Out keeps two things big in its branches and two things small: the kitchen and the restaurant area with space for guests are quite large. There is room for a lot of guests and many people in the kitchen are busy preparing the burgers at the same time. This means that large quantities can be sold in a short time. What is kept small is the checkout area and the menu: We haven’t seen an In-N-Out branch with more than two checkouts. Since the menu is so small, it goes quickly despite the sometimes very long queues in front of the cash register, even if there is only one cashier.

Furthermore, In-N-Out consistently refrains from a “beautiful” interior design of its branches. Evil tongues like to refer to this as the slaughterhouse atmosphere, and we have to admit that there is something to it ? The many white and red, the tiles, the lack of comfort – it takes getting used to, but if you want to go out to eat “nice”, you are in a fast food Chain maybe not in good hands in general.

Now it’s time to get down to business: what are the burger variations at In-N-Out? Be forewarned, the list is running out. At In-N-Out there are:

That’s it. Three different burgers. No joke. With french fries and milkshakes (three kinds). The first In-N-Out visit we were shocked, but honestly you don’t need all the other bells and whistles. Bacon here, rocket there, Simmenthal cheese, Emmenthal beef (… yes, the turner is on purpose) … especially in chains that offer such variations, everything tastes the same in the end anyway. In-N-Out doesn’t need that.

If boredom does arise, In-N-Out has an ace up its sleeve with its secret menus. What’s it all about? The secret menus are variations of the three burgers, you can e.g. Order with toasted bread or in protein style (without bread, just wrapped in lettuce leaves … iiieeeks). The secret menus have long been considered an urban myth and so you can find an overview of the secret menus here, for example. In-N-Out Burger has now cleaned up and published a list of the Not so Secret Menus itself. So there’s no reason to be hesitant about asking about grilled cheese at the checkout. Yes there is!

In-N-Out Burger: That’s how we liked it

Without talking too much: Very cool. But sometimes you have to leave the church in the village. At In-N-Out there are ultimately only burgers and burgers are burgers and not a revelation. But: very tasty burgers! You can really taste the freshness of the ingredients here. We see the reduced menu as an advantage, because you know exactly what taste you can expect. If you want to do your double double, you go to in-n-out, if not, then not. The sauce on the burgers is always the same and determines the taste.
And to mention it again: In-N-Out is our absolute price-performance winner. For less than 15 dollars there are two complete menus including refill of the drinks, with Five Guys and Shake Shack you pay about twice as much! Compared to the milkshakes at Shake Shack, the milkshakes have a pretty stinky taste. They’re not bad, but personally tasted too artificial for me (Christian is into that kind of thing and thought they were great), even if they are made with real ice cream.

Our conclusion: Do believe the hype! If you are in California (or Arizona, Nevada, Texas, Utah … there is now In-N-Out there too), then be sure to stop by. By the way, the In-N-Out burgers are no longer an insider tip, we met at least one group of Germans in every In-N-Out, who also extensively photographed the burgers with the camera