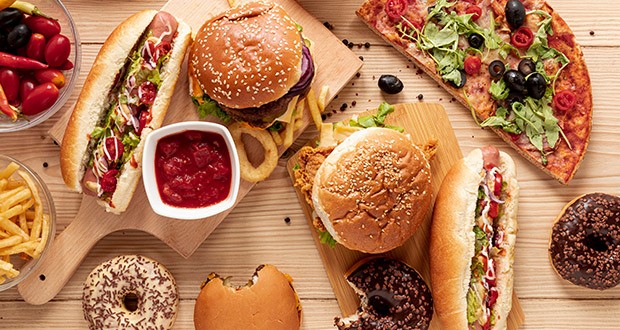 Interesting Fast Food Items – Life is stranger than fiction and when it comes to food, one man’s meat may well be another man’s poison. These 15 fast food items may not be so strange in the countries they are available, but back home here in the good old U.S. of A, these are the stuff of which only Rod Serling would have found “interesting.”

2. Pizza Hut Sri Lanka’s Birizza: with sides of onion spicy gravy and salad, Biryani rice may be fragrant and flavorful to eat, but with paneer cheese or chicken topped with pizza crust, it’s going to remain popular only in Sri Lanka.

3. KFC Indonesia’s Cheese Donut: how would you like cheddar and shredded Swiss cheeses topping a glazed donut? Think it’s weird that Indonesians find donuts with cheese toppings pretty exciting to eat? Come on, now, let’s not cast the first stone, we do have Frito pies, boudain, and fried pickles, right?

4. Pizza Hut Japan’s Black Ninja Burger: a sandwich that resembles a ninja? Well, why not? Pizza Hut Japan has onion, mayo, burger patty, a humongous bacon piece, and lettuce all sandwiched between a bun that’s black as night but isn’t rye bread. The Ninja Burger has a “tongue” and even a mascot of its own!

5. Domino’s Australia’s Wagyu Beef Pizzas: order the Wagyu Three Ways Pizza with toppings of Wagyu rib meats, sliced Wagyu sausage, rasher bacon, ground beef, tomato and bell pepper sauce, and Wagyu bresaola and a second pizza of Wagyu rib meat, Camembert, red onion, hollandaise sauce with truffle infusion, and cherry tomatoes gets automatically added to your bill. This $50.00 in Australian dollars combo was the highest-priced pizza ever made and sold in the country.

7. Pizza Hut Singapore”s Double Sensation Pizza: since we’re on the subject of bizarre, Pizza Hut Singapore was not to be outdone. Their “holiday special” had a stuffed bottom crust topped with bell peppers and chicken pepperoni with – hold your breath now – a smaller pizza right smack on top of it made with Edam cheese slices, mango mayonnaise, zucchini, turkey ham rolls, and tomatoes. There’s also a small cherry on top. Some stunted holiday “pizza tree” that was!

11. KFC’s Double Down: imagine you’re in “The Twilight Zone” and medication for those terminally ill with cardiovascular disease is prescribed as the Double Down “sandwich” of bacon and cheese between fried chicken patties to make room for a growing population. ‘Nuff said.

12. Krispy Kreme United Kingdom’s Mince Pie Doughnut: if you know what mincemeat pies are and you see they are being made into doughnutshere like they were in the UK last year, why, you would go absolutely bonkers!

15. Pizza Hut United Kingdom’s Cheeseburger Pizza: blimey! Bizarre seems to compensate for the blandness in British cuisine, the probable reason why Pizza Hut came up with another extraordinarily queer creation. A pizza with a crust made out of tiny cheeseburgers topped with mozzarella cheese and ketchup on the side. Even Dr. Who would find this pizza strange. And did you notice how there are 15 odd fast food items and EIGHT of them were created by Pizza Hut?!