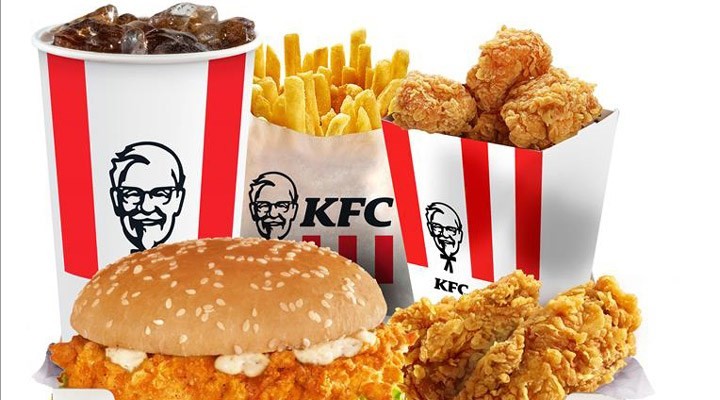 It looks like the battle of the most ridiculous colored buns is at its peak as KFC China unveils two colored buns this year and one of them looks like a pink slime has helped during the production process. This happens right after McDonald’s black burger and Burger King’s scarlet burger have sparked interest, making people wonder what they’ve done wrong to deserve this nonsense.

The Rose Cheese Roasted Chicken Burger, aka the pink burger, and the Black Diamond Bacon Spicy Chicken Burger, aka the charcoal burger, are the limited edition surprises the big fast food chains have offered its Chinese market. Rumors have it that these burgers are inspired by a popular Japanese manga show called ‘Puella Magi Madoka Magica’ which incidentally has the black and pink hues as its main scheme.

If this is KFC China’s way of trying to pick up sales, then the company probably needs to hire a new set of finance and marketing guys because the two burgers – pink and charcoal black – will probably end up not making the list of the best selling fast food items ever made. Well, maybe not in the Western part of the world because apparently, KFC China diners are enthusiastic and ecstatic about the new burgers, tagging everyone they know in social media with the hashtags #pinkburger, #unique, and #yummy to name a few.

Based on recent reports, KFC China has not been doing well in the market due to the food safety issues and harder competition from other big-time fast food chains expanding in the country. Sales have been down for the last three years and the company has lagged last quarter by 10 percent.

Other Outrageous Burger Creations in the Market

Of course, this isn’t the first time a playful food creation has made the news round in the Internet as there are other burgers far more ridiculous than the pink and charcoal buns.

As if crabs are not fatty enough, the company even made it more sinful by deep frying it, adding a huge ciabatta bun with a catsup covering, and serving it with a big-sized frites and soda. It is like a heart attack on a plate waiting to explode anytime it wishes.

Who can forget the Double Down, wherein KFC has changed the name of the game to two fried chicken used as buns? Put in more bacon, cheese, mayo sauce and a huge chunk of beef patty, as what South Korea has done to modify it, then you have something that will definitely increase the level of cholesterol in your blood.

As the name implies, the buns used in this new burger are red in color. It comes in two patties, the Samurai beef and Samurai chicken, topped with a red spicy miso and pepper sauce and red cheese. The company has obviously picked up the color motif too much in the production of this burger, which turned out to be tomato powder.

It’s like looking at the undead version of a burger, this burger has been made black by ink coming from squid, which includes a black cheese, huge slab of patty and a variety of vegetables to add more kick.

Going on a much sweeter side, South Korea has thought it is a good idea to top their patties with blueberries, using the sauce and fruit, and a hybrid burger which includes mushroom waffle patty and a side of raw mushroom.

The Need to Recreate the Menu

Even if it seems funny or insane for Western people to see their beloved fast food chain being used as a testing lab overseas, the purpose of revamping and offering new food items that locals will be gladly to eat is to improve sales abroad.

Surveys and logistics will tell the company that what they currently offer may not be what the local market they are trying to penetrate like. Coming up with innovative products can be the key to making it big in a different market, especially if they are looking at the Asian location.

Fast food chains need to understand that the Asian palate is uniquely their own because they are used to tasting different burst of flavors in one meal. This can be rooted as far as to how an Asian family cooks. If Western cooks are used to using the same flavor components, Asians do the opposite, preferring to combine totally different flavors to come up with one unique taste.

Most importantly, people in the food industry must understand how people react differently to food so if they wish to be a well-known restaurant or chain in that area, it is important to do research as to what the people do, see, like and eat in order to create something suitable for that place.