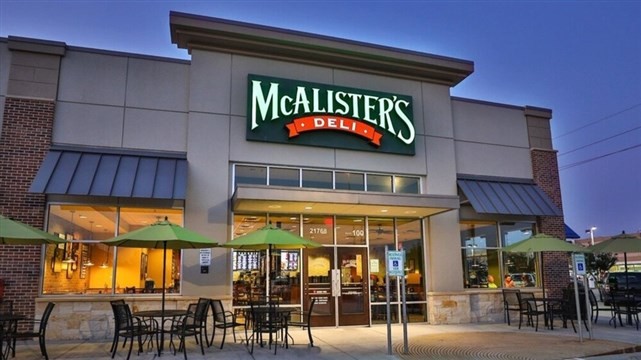 In a world that’s filled with fast food joints, it’s no secret that getting delicious food at the speediest time possible is a priority. Everyone’s busy and running around, so restaurants know that people these days love the convenience of having fast food that can give them what they want to eat in a jiffy. Imagine getting that same convenience and speed, but for food that’s fresh, delicious, and healthy. Forget the grease, forget the empty calories, and think of food that’s freshly prepared from topnotch ingredients as soon as you order it. That’s what McAlister’s Deli is about.

Perfectly blending the elements of a deli and a fast food restaurant, McAlister’s Deli gives diners the best of both worlds. Why choose between quick service and fresh tastes when you can have both? This unique offering is what makes McAlister’s Deli stand out from the rest, pleasing those who are health-conscious but still want the full flavored delectability of meals.

Where it all began

The first McAlister’s Deli Restaurant was put up in 1989, by retired dentist Dr. Don Newcomb. This was in Oxford Mississippi, and it began as a converted gas station. The garage door and the black and white tiles, elements of that original restaurant, are still present in McAlister’s Deli branches today.

The unique offering of hearty-sized deli fare gained popularity, and the response from diners was overwhelming. This led to requests for franchises, and this is why today, you can find McAlister’s Deli restaurants in more than 300 locations across 23 states. From its humble beginnings in Mississippi, you can find McAlister’s in the East, the West, the South, and the Midwest.

Nutrition is a top priority

The fresh taste of deli fare makes McAlister’s a refreshing alternative to the usual fast food. Even those who are watching their weight and conscious about what they eat can find utter satisfaction in McAlister’s menu. As they say, “McAlister’s makes your diet delicious.”

McAlister’s Deli makes nutrition a top priority, providing lighter options as well as special menus that are gluten and allergen sensitive. The menu may have items, but you can add or subtract to your condiments, sides, and even the ingredients with confidence.

Putting the DELI in DELIcious

Whether you’re on a diet or simply looking for fresh alternatives to the food that you eat, McAlister’s Deli provides a menu of over 100 items that are all delicious. Here are some items you can expect from McAlister’s menu:

It wouldn’t be a deli if it doesn’t have high quality sandwiches, and McAlister’s has many in its menu. In fact, you don’t just get sandwiches, you get several subcategories as well:

• Hot Sandwiches – If you want your sandwiches served hot, you can choose from items like the Southwest Turkey Melt, the New Orleans Muffuletta, and the Pot Roast Sandwich, among others.
• Grilled Sandwiches – You can also opt to have your sandwiches grilled, such as the Spicy Southwest Chicken Griller, the Four Cheese Griller, and the Ham & Cheese Toastie.
• Club Sandwiches – McAlister’s also takes club sandwiches seriously, offering a number of varieties to your usual club. Some of them include the McAlister’s Club, Black Angus Club, the Orange Cranberry Club, and the King Club. There’s also the unique McAlister’s Club Wrap, which is your basic club but only in a wrap.
• Classic Sandwiches – There are also simpler sandwiches in the menu, such as The Italian, the BLT, the Tuna Salad, and Deli Classics (turkey, ham, corned beef, roast beef, salami or pastrami in your choice of bread).

A lighter alternative would be one of McAlister’s Salads, which are packed with veggies but also contain some meats. The Savannah Chopped Salad (with grilled chicken breast) and Chef Salad (with Black Forest ham, applewood smoked bacon, and Butterball smoked turkey) are some examples. Of course, there all vegetarian options too.

From nachos to soup and chili, you have everything you need to get started. Sides also include chips, potato salad, steamed veggies, and coleslaw.

Fall in love with potato spuds with all the goodness of meats, cheese, other toppings, and your choice of dressing (e.g. ranch, Bleu Cheese, gravy, cheese sauce).

McAlister’s also offers a variety of cakes, cookies, brownies, and other dessert bars that will leave your sweet tooth satisfied.

There are many of the usual beverages available, but on top of that list is McAlister’s Famous Sweet Tea, freshly brewed from a special black tea blend and pure cane sugar.
With all of these offerings, every visit to McAlister’s Deli restaurant is like a culinary adventure waiting to be explored. It’s really no wonder that customers leave every McAlister’s Deli satisfied, happy, and always craving for more.