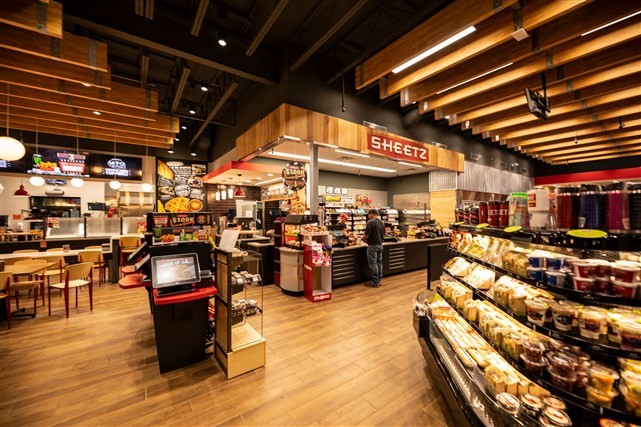 Sheetz Menu With Price – Sheetz boasts of being the king of convenience stores in terms of foodservice sales volume. Its annual sales per unit exceed $1.2 million. This family owned company is widely known for its guest self-order kiosk service system, as well as its wide range of customized foods.

It is a fast casual restaurant where customer can have made-to-order burgers, pizza wraps, sandwiches, fajitas, chicken strips, hot dogs, and many more. This is a place where you can also customize your order of espresso drink, coffee, fountain beverage and smoothie.

You can check the Sheetz official site, check latest and current menu price and compare it with our menu price cause restaurant can change their price anytime so sometime it may be little variations in price which is listed here and actual.

About Sheetz: Headquartered in Altoona, Pennsylvania, Sheetz, Inc. is a chain of gas stations/convenience stores owned by the Sheetz family. Based on the “Convenience Restaurant” concept, the company offers made-to-order sandwiches and hot dogs, as well as pizzas, paninis, breakfast items, salads, french fries, chicken strips, and other fried appetizers. On Christmas Day and New Year’s Day, Sheetz regularly offers customers free coffee and stay tuned to our menus with prices here.

A Look at the History of Sheetz

Bob Sheetz founded the company that bears his surname in 1952. He did it by buying one of his father’s dairy stores located in Altoona, Pennsylvania. Nine years later, he hired his brother Steve to help him manage the store.

Sheets second store opened in 1963, with the name “Sheetz Kwik Shopper.” In 1968, the brothers opened another store. One year later, Steve, who was working part time for his brother, joined in full time and became the store’s General Manager.

By 1972, the Sheetz brothers have already opened fourteen stores, up from seven the previous years. One year later, the company added gasoline pumps and launched their self-serve gasoline in Central Pennsylvania.

In 1983, Sheetz already has 100 stores in different locations. After one year, Bob handed over the reins of the company to his brother Steve, and retired.

Bob’s son, Stan, joined the company in 1995 as the President of the company. Steve assumed the position of Chairman of the Board. Maintaining the tradition of operating a family business, Sheetz now has five family members serving on the company’s Executive Committee.

Sheetz opened the first “Convenience Restaurant” in the world in Altoona, P.A. early in 2004. At the end of that year, Sheetz started offering the new Sheetz MasterCardPayPass with built in RFID technology. Sheetz was one of the first retailers who adapted this technology in their business.

By 2013, Sheetz has already more than 400 outlets spread across the states of Pennsylvania, Maryland, Virginia, West Virginia, Ohio and North Carolina. It now employs around 13,600 associates.

The company has no plans of selling franchises; therefore all these stores are company-owned and operated. Sheetz has sustained its image as a family owned company as well.

Sheetz has many types of food items that make their customers go back for more. Here are some of their popular meals.

This restaurant has a lengthy list of Made to Order menu that includes sub sandwiches, chicken wings, pizzas, salads, pretzel melts and many more. But the best value on Sheetz menu is the two hot dogs for just 99 cents. For just this amount, you can load up yourself with your choice of mayo, ketchup, relish sauerkraut or onions.

There are also other treats that you will surely love, such as the Grilled Chicken Caesar which consists of fresh romaine and grilled chicken with Caesar dressing and croutons and sprinkled with shredded parmesan cheese.

You can also try their Classic Chefs Salad which contains fresh greens topped with ham, roasted turkey, shredded cheddar cheese and your choice of toppings and dressings.

Sheetz also has a full-service espresso and smoothie bar for lovers of such things. The bar is staffed with trained baristas so they can surely whip you up specialty coffee drinks such as cappuccinos, lattes and mochas. You have a choice of having them frozen, hot or iced.

Sheetz really never stops expanding. Last week, a new Sheetz store opened in Williamsport, after several attempts by third parties to block the project. Customers were excited for the new store’s opening even if there was a minor glitch in its electric service.

They were happy because it is a bigger store, and has lots of parking spaces. Some were thrilled that the store has more gas pumps and has an easier access.

The structure where the store stands was formerly a building that was saved from the wrecking ball. Some of the town’s officials were happy that instead of hitting the dust, the building is now serving a better purpose of providing food and gas pumping services to the community.

As an additional way of serving their local communities, Sheetz has also initiated their particular charitable activities. Being a corporate entity, the company donates hundreds of thousands of dollars every year to the charities that the Sheetz family hold dear.

The Sheetz Family has two corporate charities, the Sheetz Family Charities and the Special Olympics. Every penny raised for the first charity organization goes to the For the Kidz Holiday Event and the Make-A-Wish Foundation.

The Sheetz Family Charities is a nonprofit corporation. Donations to this corporation are tax-deductible. It benefits human services which focus primarily on gift distribution programs.