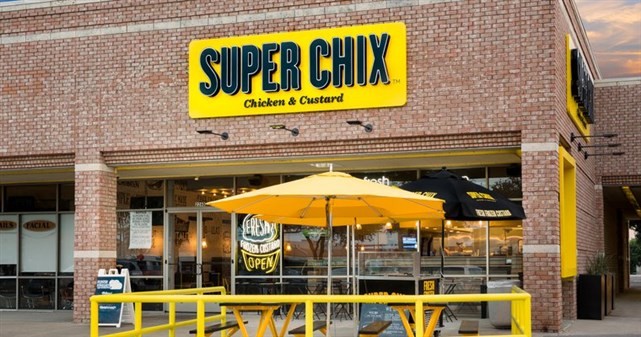 Super Chix Menu With Prices – Yum! Brands, the owners of KFC, Pizza Hut, and Taco Bell, has just opened a new chicken restaurant. No, it’s not just another KFC branch.

The new restaurant is named Super Chix, and unlike all the other restaurants owned by Yum! Brands, this new chicken restaurant can only be found in Arlington, Texas – for now at least.

On April 9, 2014, this test concept was officially launched in an Arlington strip mall. The pilot branch, located at the corner of Cooper St. and Park Row Rd., is just a few blocks away from University of Texas Arlington. Across the street from the restaurant is Arlington High School, which explains why the official store opening was mobbed by students, especially at lunch time.

Given that UT Arlington is a stone’s throw away, the lunch time crowd even extended until as late as 2PM. The young eager diners were all clutching promotional coupons for free food, which could be found on the Super Chix Facebook Page. To mark the opening day and introduce their offerings, Super Chix distributed boxes upon boxes of chicken strips, followed by free fries and frozen custard during the days that followed.

While Yum! Brands is the mother company, you won’t find any traces of it in the restaurants and even in the website. For starters, the restaurant interior is very different and modern with its black and white tile walls, high tables and cement flooring. The queue is also formed to the left of the counter, unlike what people are used to with most fast food restaurants. There’s also a stark difference if you compare it to KFC, Taco Bell, and Pizza Hut, because the Super Chix formula is drastically simple, but appealing to a different market of those who are more conscious about their culinary choices.

Branding their core offering as ‘the last true chicken sandwich,’ Super Chix wants to make its position clear: “We left out the junk, we used ingredients everyone can pronounce, and we decided every order would be cooked to order.”

According to their website, Super Chix is the product of the collaboration of three food-obsessed friends – Christophe, Nick, and Jeff. These friends firmly believe that chicken “could and should be better,” so they spent a long time searching for the right recipe that will give customers the best chicken they have ever tried. Even the toppings are very well thought of and deliberately chosen – Beefsteak tomatoes, lettuce, jalapenos, fried “haystack” onions, and even specially crafted pickles (Kosher, Hot, and Sweet). For an additional cost, you can make your chicken sandwich even more perfect with cheese and bacon. More importantly, they don’t use MSG, HFCS, and phosphates.

Super Chix is mainly a chicken restaurant, but as it wants to appeal those who are very conscious about their culinary choices, Super Chix also offers hand-cut fries that are sourced from certified Idaho potatoes. They only use potatoes that meet the strictest standards when it comes to growing, storage, and shipping.

Once the potatoes are in the store, they are hand cut in thin slices and fried with the skin on, in 100% refined peanut oil. So customers get the flavor and crispiness that they want, and can even choose among three seasonings: rosemary black pepper, sweet and salty, and just plain salty.

Another offering is what they call ‘Fresh Frozen Custard,’ which is a little more sophisticated than your usual fast food ice cream. To make this they use the ‘Super Chix Vanilla Blend,’ which is a combination of two kinds of vanilla beans: Madagascar Bourbon (known for its smooth creamy flavor) and Indonesian (known for a sharper flavor). Vanilla, chocolate, and strawberry flavors are available on a daily basis, but Super Chix offers a flavor of the day. Flavors of the day include Cookie Dough, Mint Oreo, and Fluffernutter (marshmallow and peanut butter combined), among others. Customers can also enjoy the frozen custard as sundaes, hand-spun shakes, and mix-ins.

With the chicken sandwich and chicken tenders at its core, this Super Chix offering is remarkably similar to Chik-Fil-A’s signature chicken sandwich. But even if Super Chix is in a way directly competing with Chick-Fil-A, it’s still in its infancy stages.

What’s interesting is that when you go to a Super Chix restaurant, look at the marketing materials or even taste the food, you will probably never suspect that it’s from the owners of KFC. The direction where Super Chix will be brought in the next few months and years is still unclear, given that the restaurant was just opened and the market response is still being tested. If successful, Super Chix will confirm a growing trend of fast food restaurants moving to lesser items in the menu and focusing on a few core products.