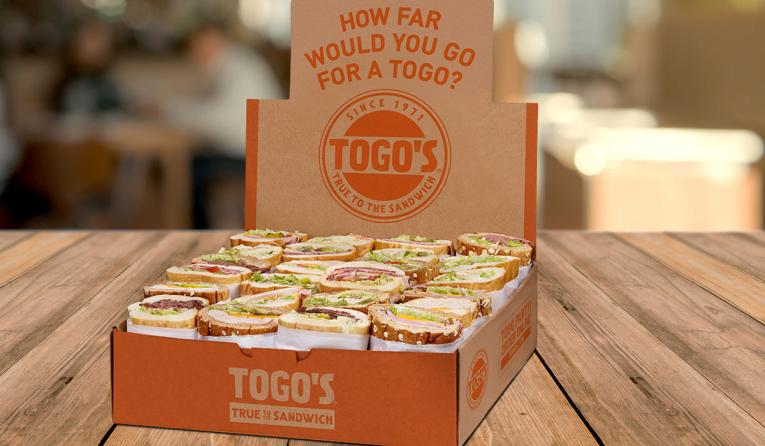 Togo’s Menu With Prices – Headquartered in California, Togo’s was established 47 years ago near the San Jose State University with a sign that read “Sandwiches To Go.” The words “to go” were written as a second line, prompting it to be called “Togo’s” eventually. Purchased in 1971 by a college student, the second location opened in San Jose’s downtown district three years. In 1978, its first franchise was sold.

Mainsail Partners now own this fast casual restaurant which specializes in sandwiches. With 250 outlets, Togo’s often team up with Baskin-Robbins which was also owned by the same company between 1997 and 2007, the year it was sold to San Francisco-based Mainsail Partners private equity (a majority of Togo’s stores are now franchises).

Togo’s bills itself as “seriously stacked sandwiches from the West Coast,” a claim it is living up to with its extensive selection of cold sandwiches:

• Ham and Cheese: your choice of cheese with Black Forest ham.
• Roast Beef: with more than ¼ pound of medium rare, 100% U.S. Department of Agriculture (USDA) certified beef that’s 98% guaranteed fat free.
• Turkey and Cheese: slow roasted turkey sliced and stacked with your choice of cheese.
• Turkey, Roast Beef and Cheese: for those with gargantuan appetites, the combination of slow roasted turkey and hot or cold roast beef gives that rare two-flavored sandwich in one serving.
• Turkey and Cranberry: this is Thanksgiving sandwich you can have any time even if it’s not November.
• The Italian: this new offering has Provolone cheese, spicy capicola, dry salami, Black Forest Ham, and pepperoni served with Italian vinaigrette.
• Albacore Tuna: dolphin-safe and housemade, this Albacore tuna sandwich is made even more delicious with lite mayonnaise and relish.
• Salami and Cheese: cheese and dry salami makes for a sandwich that reminds you of North Beach.
• Turkey and Avocado: at Togo’s this sandwich is considered “quintessentially” California with fresh Hass avocado and slow-roasted turkey.
• Turkey, Ham and Cheese: Black Forest ham, your choice of cheese, and slow roasted turkey.
• Chicken Salad: the classic chicken salad is given a twist by Togo’s with antibiotic- and preservative-free chicken combined with diced pickles, lite mayonnaise, sliced almonds, celery, and red onion.
• Turkey and Bacon Club: applewood smoked-bacon and slow roasted turkey are introduced in this unusual sandwich.
• California Club: buttermilk ranch dressing is served with fresh avocados, Black Forest ham, applewood smoked-bacon, and slow roasted turkey.

All Natural Chicken: simply prepared preservative- and antibiotic-free chicken roasted to perfection, sliced, and stacked in a delectable sandwich.

Meatball: Provolone cheese and tomato sauce smother hot meatballs made of pork and beef that have been seasoned with Romano cheese and Italian spices.

The Cuban: have a taste of Cuban mustard as a dressing with pulled pork, Swiss cheese, Black Forest ham, and tangy pickles on white bread.

The Triple Dip: your choice of bread with more than ½ pound of cold or hot roast beef, pastrami, Provolone cheese, horseradish mayonnaise, and turkey plus au jus.

The Clubhouse: on sourdough bread like they make it in San Francisco, this clubhouse sandwich has slow roasted turkey, honey and fat free Dijon mustard, applewood smoked bacon, and cheddar cheese.

Pepper Jack Pastrami: get a kick out of this combination on white bread of pepper jack cheese, Italian pepperonchinis, pastrami, and Thousand Island dressing.

The choices of hot and cold sandwiches can be pretty overwhelming at Togo’s. If this happens to you, don’t fret, they have a shorter list of Signature Sandwiches, and don’t worry, because these are equally flavorful:

Aside from sandwiches, Togo’s offers salads, party trays, boxed lunches, and dessert, that’s why you’re really good “to go” with Togo’s. You can even build your own sandwiches for limitless combinations as well as create them as wraps and in bowls.

Perhaps what sets Togo’s apart from the rest of the fast casual sandwich chain restaurants is their emphasis on franchising. For the prospective franchisee, Togo’s will not only find you a site, they have also reduced their royalties and lowered their initial franchise fee.