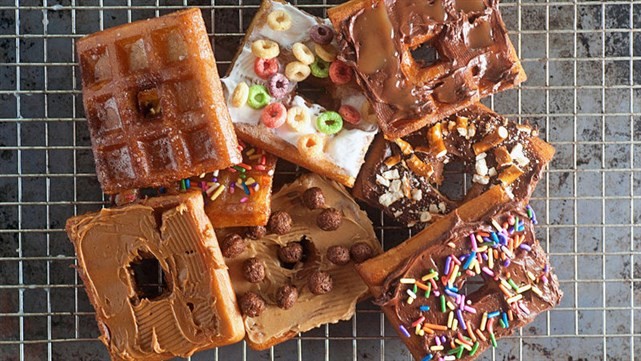 Foodies who can’t decide between a waffle and a donut should worry no longer, because there’s a café in Chicago that can give you the best of both worlds – the ‘wonut’.

Waffles Café recently introduced the ultimate hybrid between two breakfast favorites, aptly calling it the ‘wonut.’ Very affordable at $3.25 and bite size with around 3 inches in diameter, the wonuts sold like hotcakes as customers flocked to the store, curious about what the sweet goodies taste like.

The wonut is Chicago’s answer to the current trend of dessert hybrids. Restaurants are now innovating their usual menu offerings, and part of this is creating entirely new products out of existing products that are already well-loved. An example of this is the cronut, which took New York by storm as soon as it was introduced by the Dominique Ansel Bakery a year ago.

The hybrid of a croissant and a donut, this dessert became so popular, that soon after many other restaurants came up with their own versions. Krispy Kreme for instance has the ‘Krispy Kroissant’ and Dunkin Donuts has the ‘New York Pie Donut,’ both available in select locations like Asia.

Another recent hybrid is the Cinnamon Swirl Brioche French Toast by IHOP, which combines two favorites as well – the French toast and the Cinnamon swirl. In the same way, when Waffles Café introduced the wonut, it took all the best things about the waffle and the donut, combining it into pastry perfection. This meant taking its signature waffle batter to another level and pleasing not only waffle lovers but donut lovers as well.

To make a batch of wonuts, the chefs in Waffles Café need around two hours, because it involves making the waffles as they normally would in a grill. The waffles, already baked, are subsequently deep fried just like donuts. After frying, the wonut is either served plain or dipped in the glaze of choice – whether sugar, chocolate, maple, or marshmallow.

The creation is hybrid perfection, because you the texture of the waffle is actually a perfect base for all kinds of glazes and toppings. The deep frying process also makes it have the perfect characteristics of being cakey and crispy, something one can only expect from a waffle-donut hybrid. The toppings that one can place in the wonut range from sprinkles and chocolate chips to candied walnuts.

Customers who got to try the wonuts for the first time actually loved it, and now Waffles Café is getting a lot of orders, trying to keep up with the demand of those who want to try this new creation. There’s a lot of buzz surrounding this new product, mostly coming from customers who are very satisfied themselves.

But Waffles Café knew that when it came out with a new and revolutionary product like this, you have to do it right the first time. After all, nobody really knows how big the ‘wonut’ will be, and how many restaurants will eventually copy this hybrid dessert. So Waffles Café made sure it provided customers with enough reasons to come back – creating flavors that are so delectable, you’d want to try them all.

Currently, the most popular items in the menu include the Red Velvet, topped by candied walnuts and still containing that whipped cream cheese the red velvet is known for. Another bestseller is the Green Tea wonut, which gives customers a different kind of flavor that they’d want to keep coming back to.

Waffles Café owner Alex Hernandez mentioned that his favorite flavor of all is the Mexican Chocolate, which contains spicy cocoa powder and shaved dark chocolate. Add to that the unique flavor of orange Anglaise and you get something that will truly spice up your palate.

Of course, the signature product of Waffles Café is its waffle, and these handmade creations already have a following out of those who like to frequent the café. Served with the customer’s choice of mixed berries, Nutella, banana, or apple pie filling, these waffles are what Waffles Café is truly known for.

If customers opt for a gluten-free version of their waffles (Red Velvet, Green Tea, Mexican Chocolate Waffle, Triple Chocolate, Brussels Waffle, Liege Waffle), they just need to add $2 so that the waffles can be made gluten-free. Due to demand, gluten-free versions of the wonuts will also be made around next week.

Waffles Café also offers a delicious waffle sampler platter (called the ‘Waffle Flight’), as well as pancakes and French toast. If customers crave for something savory instead, they also have products like the Cheddar & Short Rib, Waffles Benedict, Waffles Egg Sandwiches, and other creations that you can have with bacon, ham & cheese. They also have omelets.

Only time will tell whether the wonut will take flight and be as big as other hybrid breakfast and dessert favorites like the cronut, but if the lines at Waffles Café are any indication, it looks like the wonut is here to stay.