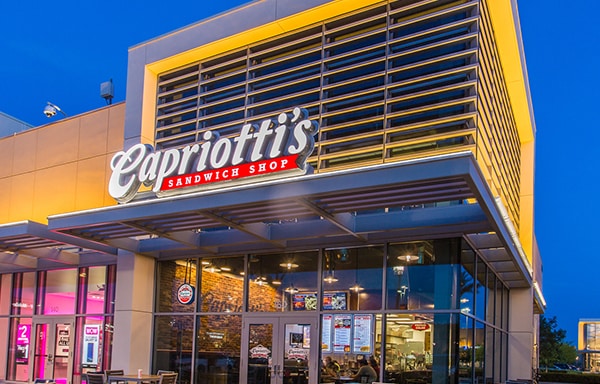 There are a lot of ice cream shops, burger shops, and pasta restaurants but when people think of sandwiches their minds often drip to two choices: Subway because of how horribly generic they can be and Capriotti’s, because of how good they are.

Capriotti’s has stood the test of time and has become one of the country’s most highly acclaimed sandwich shops. Everyone has fallen in love with their signature turkey sandwich and there’s no doubting that the quality of their products and services are second to none. You know what you’re getting when you walk into Capriotti’s and you know it’s going to be good.

A Look at History

Capriotti’s started way back in 1976 in a neighborhood called Little Italy, which was a part of Wilmington, Delaware. Lois Margolet always wanted to open her own shop but the problem was the competition – in just a three block radius there were already around seven sandwich shops!

So she knew she had to do something different and it had to be profitable as well. So she decided to go with the concept of focusing on sandwiches for real turkey lovers. The idea was to use whole turkeys roasted overnight. It was a guarantee for fresh meat and no other shop was doing it at the time.

With the right concept in mind, she quit her job and borrowed some money in order to buy a boarded up little building in North Union Street, Wilmington. She then asked her brother Alan to help her with the business and they opened the very first Capriotti’s, named after their grandfather.

At first they only had to roast one turkey but as their popularity grew they were roasting ten to twelve per night. By 1987 they brought along their cousin, Diane Rizzo, and started expanding the business. They opened the 2nd and 3rd Capriotti’s in New Castle and Newark.

Soon enough family members were franchising the business. In a few years they started franchising out to other people. By 1993 they had expanded to Las Vegas, Nevada.

95% of the company was then bought by investors Ashley Morris and Jason Smylie in 2008. They had become franchise holders of Capriotti’s since 2004. Morris is now the current CEO of Capriotti’s.

What Capriotti’s is Known For

If you want something a little bit more traditional then the best choice is their multi-award winning Cheese Steak. Just like any Phillie Cheese Steak, this utilizes premium grilled steak layered with melted American cheese. It can be topped with mushrooms, onions, or peppers.

Last but not least is their Homemade Meatball Sub. One of the best things about Capriotti’s is that they make their own meatballs by hand and this sub is the perfect example of their delicate work put into acton.

Both in 2008 and 2009, the Las Vegas branch – which is now the headquarters of the company – was the official sandwich sponsor for the World Series of Poker.

By the time Ashley Morris acquired the majority of the company in 2008 there were roughly 44 locations around the country. Now there are 96 locations and counting. Capriotti’s is now available in 14 different states and is looking to expand outside of the country.

Capriotti’s dishes are so good that the Bobbie was ranked the Greatest Sandwich in America in 2009 by AOL. USA Today also listed Capriotti’s in their list for the Ten Great Places for a Surprising Sandwich. In 2014 it was listed by Forbes as one of America’s Best Franchises.

It was listed by the Huffington Post for having one of the best sandwiches in the USA and again by the News Journal.

Lois Margolet had a dream and she fulfilled that dream with a little luck and a lot of hard work. Innovation and the help of her brother became the stepping stones into turning her dream into a reality and it has since become one of the most revered franchises in the country.

Capriotti’s isn’t a business about making money – it’s about serving delicious, fresh sandwiches to its customers and that hasn’t changed since the first store opened in Delaware. As a testament to this, the very first branch is still open to this day, standing as proof that a dream can become a reality when paired with hard work and the will to do whatever it takes to keep customers satisfied.